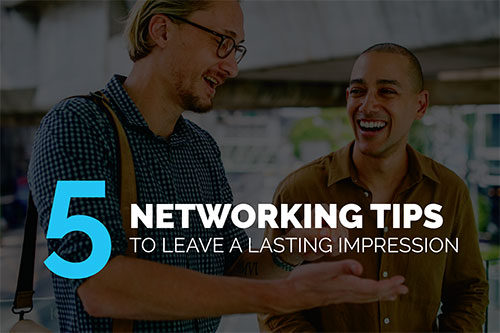 Once you learn how to make a strong impression on prospects, networking opportunities are everywhere.

Many people associate networking with very specific professional functions, such as conferences or “networking events.” What they don’t realize is that an unassuming event like a happy hour with friends can be as good an opportunity to meet new contacts as the annual industry meetup.

If the idea of networking somewhere informal sounds awful, you might want to reassess how you network; it isn’t always about polish and salesmanship — you want to make connections that matter. Here are five tips to stack the odds in your favor:

Many people go into networking events with the idea that quantity improves their chances of making a valuable connection. The more people you talk to, the higher your likelihood of talking to an important decision maker, right? In 99 percent of networking situations, the opposite is true.

Real conversations can’t be rushed. It can be tempting to work fast — handshake and a smile then move on — but taking this approach doesn’t make a lasting impression. Worse, it can come across as shallow, even rude. Take the time to at least try and make a real connection with the person you’re speaking to; it may not always work, but it definitely won’t if you don’t make an effort.

Understand that networking isn’t about the immediate sell — you’re building lifelong relationships. When you slow your expectations on a return, you open up the space where real connections can occur. Networkers who bring something more to the table than a sales pitch are more effective in the long term than people who are always striving to close.

You’ve been rehearsing your elevator pitch and finally have it down pat. Now’s the opportunity to let it rip, right? Wrong!

When meeting a lot of people at once, don’t rely on a script to sound polished. Each person arrives at networking from a unique perspective — and with their own goals. When you have a canned speech ready to go, you overlook their individuality and personal complexity. You are now ill equipped to meet their expectations.

Similarly, don’t tell the same story over and over. Not only will you likely come across as overly rehearsed and inauthentic, but there’s a chance that your story will be overhead by the same people you told it to earlier. Remember that networking isn’t about knowing everyone, it’s about making an impact on the people you meet. When someone overhears you telling the same story, that impact… isn’t going to be a good one.

Letting down your guard and speaking extemporaneously can present a challenge for a lot of people. For effective networkers, it’s an essential part of making real connections. Like anything else, practice can help you hone your skills and feel more comfortable. Even “being natural” becomes easier with some practice.

Skipping the script allows you to find natural in-roads to set up the next conversation. Make your first connection after meeting about something that’s interesting to you both – like sending a copy of the book you just finished and were talking about. This is especially true at a large conference, where everyone you meet is looking to sell something.

Remember, the objective of every conversation you have during networking shouldn’t be to sell yourself — it should be to find commonalities between you and other people.

Don’t network while distracted. When you enter a conversation half-heartedly, you aren’t giving your all to forging a viable connection. Plus, it makes you look rude.

Fight the urge to start looking for your next contact early. When you’re talking to someone, keep your eyes — and full attention — focused on them. Don’t keep one eye on the crowd, hunting around the room for your next opportunity. Stay invested in the conversation until it reaches its natural conclusion. Stay in one place!

Before you set up shop, get an understanding of the space you’re in. Most rooms are defined by an informal set of spaces, each with its own “vibe.” A starting zone, where people enter and get registered, feels different than a more social area — i.e. where people are getting drinks. Hallways and restrooms represent areas where people are in transit. Understanding where you position yourself, and the informal expectations of that space, will make a difference in the tenor of your interactions. If you’re trying to talk to people by the door before they’ve checked in to an event, they aren’t likely to be in the headspace for real conversation.

Finally, give the same amount of attention to everyone you chat with. Maybe you aren’t talking to the VP at a Fortune 100 company — but you never know who your new contact has in their network. From event staff on up, give everyone your full attention and respect. Often, the best opportunities come from unexpected sources.

Prepare for a networking event like you would for a job interview. Get an idea of who might be there. Is the event catering to a particular industry segment or level of seniority? Learn more about the kind of issues that people in that position tend to face.

Preparing for a networking event means more than just having an understanding of industry trends though. The people you remember from professional events aren’t the ones who show you their working knowledge of your job, they’re the ones who contribute to the conversation.

Make sure that you are more or less up to date on industry trends, but also be ready to speak intelligently to a range of subjects, from the news to sports to the podcasts you’ve been listening to. Don’t paint yourself in a corner with nothing to talk about but the weather when people start getting comfortable.

Dozens of business cards exchange hands during a conference or networking event. Most of those cards are plain, unremarkable white rectangles that may get a note scribbled on them, then go into a hotel room trash can never to be seen again. Avoiding that fate should be a priority of every networker, both in the way they speak and the business card offer.

When someone hands you a card that stands out, you remember who they are. For years, graphic designers and other creatives have used business cards as the tiny canvas where they can show off their creative spark. More professionals across industries are starting to use their card as a space where they show off what they are about. And, thankfully, in many instances it doesn’t require exceptional photoshop skills.

A lot of making an unforgettable card boils down to simple materials, design, and inspiration. Different factors in your card can make it feel more like a firm, professional handshake or a laid back, friendly high five. Selecting a bold visual effect, such as a color foil or die cut accent, will make your card stand out from the rest. Even professionals in more traditional industries can use paper weight, finish, and texture to lend an air of sophistication to their presentation.

Want to make a card that leaves a lasting impression? Contact us!